A neighbour bought a new “Receiver”, SONY STR – DN 1050 to his “home theater”. I was making a loud noise in his loudspeakers when I was transmitting. His old “Receiver” had no problem. The distance from the antennas is approximately 80 meters. Estimated field strength is well below 3 V / m which is, to my knowledge, the field strength a consumer equipment should withstand. The numbers are as usual not accessible to the man on the street. The disturbance was heard in ” surround speakers ” which had the longest lines.

In an attempt to cure the problem the speaker lines were wound with 5 turns in an FT 240-77 Ferrite core from Amidon . At the same time an extension cord with an equal core with 5 turns was connected between the wall outlet and all units. The disturbances remained, but had changed character. If the antenna was disconnected from the TV digital box, the disturbance disappeared. If a galvanic isolator coupled into the antenna line a weak disturbance remained (Note 1).

Upon contact with the SONY support their only advice was to reset the Receiver to factory settings. How that should be able to cure the problem, they could not explain.

An EMC filter for common mode currents was made for the loudspeaker lines. It is made up of 7 FT-140-77 ferrite cores from Amidon. One for each loudspeaker. The Subwoofer is connected with a special line so it must be winded on a big FT-240-77 core. 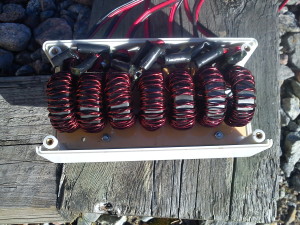 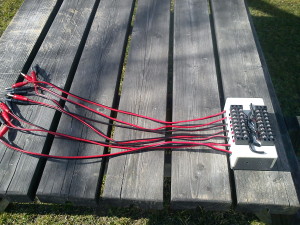 The attenuation on the different amateur band was measured.

The measurements were made according to picture 1 below, with my IC-735 as a signal source.

In an effort to try to find a point with the lowest attenuation, the frequency was varied and also the impedance at U2. The lowest value found was 20 dBs at 25 MHz.

At a later point, it was discovered that the attenuation on shortwave for that thing was only 5 dBs. Therefore a new extension with a ferrite toroid with several turns was made. 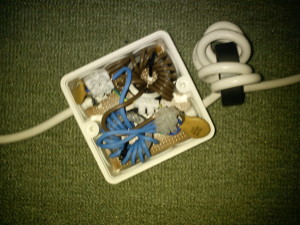 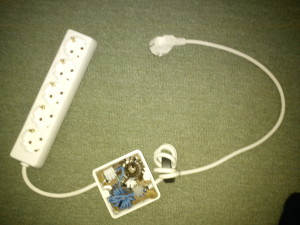 I got a call from the neigbour where he said the noise was back in the loudspeaker. It totally blocked the sound from the TV set.

There was now a satellite box connected to the receiver.So the obvious reason for the new problem was RF entering the receiver’s HDMI outlet connected to the new box. An RF choke was made of RG-6 coax wound with about 8 turns through a FT 240 torroid core of #31 material. It was connected in series with the satellite box. The old power line filter was also changed with one from GE in a metal box. Idea was better resistance to fire if hit by a strong surge. Click to get enlarged picture:

It was also found out that the 7 line loudspeaker filter had never been installed. And that there had always been a low noise in the loudspeakers when I transmitted but it was so little he didn’t bother to connect it.

Today all filters were connected and no noise could be heard in the loudspeakers!