In November 2014 XYL and I made a trip to Tenerife. I looked for a hotel with a good radio location and a room with “sea view”. The choice fell on hotel “Luabay” in Puerto de la Cruz. There was a free take off across the Atlantic Ocean from the Southwest to the Northeast.

The equipment was a FT 817nd with a small PS, an ATU, a manipulator of soldered copper laminate pieces and earpieces. The antenna was a wire along a 5 meter long telescopic fishing rod, an equally long counterpoise wire and a short wire with a powerful battery clamp for earthing to the balcony railing. The antenna was fed with 5 meters of RG-58 which was wound on a ferrite core at the antenna. The antenna pointed due west. The tuner managed to adjust the antenna system from 30 m to 15 m.

Most contacts were made with HAMs on the East Coast of the United States. Some were rag chew QSOs with QRP stations, having between 1 and 10 watts. But also numerous contacts with Europe, South America and the Caribbean. All contacts were made on CW. 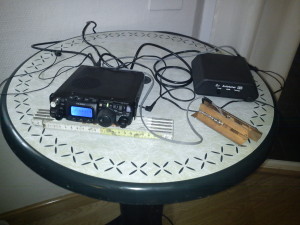 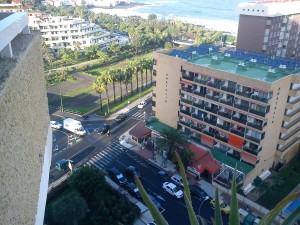 I only had the antenna on the balcony when it was dark: 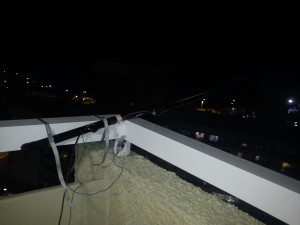 Below are some Reverse Beacon spots.

Good signals on 20m late at night at the end of November with 5W and a piece of wire.

At home in Stockholm the band closed when the sun sets early in the afternoon.