Was called by my neighbour with the new Receiver with RF detection ( The problem  ). No issue for weeks but this morning the problem was back with strong noise in his loudspeakers. I tried 80, 40 30 and 20m while he was on the phone. Now nothing was heard. I have no idea what happened.

It’s extremely easy to work DX using FT8. Bands are crowded and with the amp on, you just click around. But it gets boring……..

Late in the evening the 27:th 20m opened to US West Coast with the help of aurora ionisation of a sporadic E or F-layer. Several stations were worked. Even “100W and GP” stations in California. Strongest signals were from W7. There was a sudden step in aurora activity from k=0 to k=3 at that instant. These late night openings happen in our midwinter time.

The following evening there was nothing heard from NA but good signals from South America. The k level had been quite high last couple of hours.

Late in the evening I listened for activity on 160m and there were JA stations heard on CW. But since there was strong local QRM which sounded like a faulty “Home Pug” (PLC) device I went to 1908 kHz to listen for FT8 signals. And there were a lot of JAs. Since we are not allowed more than 10W on that segment, I thought I would try split, TXing on 1840 kHz hoping somebody listened there. So I called a JA station and he answered promptly. After signing 73 the screen went totally red! A huge amount of JA stations were calling. I’ve never seen anything like it.

Winter solstice last night and the light will evtually return. Not a single day with sun for weeks.

This morning when working ZL4OL on 60m FT8 there was a carrier slowly wandering over the band. Hundreds of new switched power supplies feeding the Chrismas lighting at the neighbours. At least one of them was faulty.

Amazing how well FT8 works for regular contacts with ZL on 60 m each morning using QRP. The best time for a contact moves from day to day and just now ZL4OL pops out of the noise at 0750 UTC. His Sunset is at 0826Z and my sunrise is at 0742Z. Signals are peaking midway between my SR and his SS.

A report from the Gran Canaria trip here:

Back from a travel to Puerto de Mogan on Gran Canaria. Hopeless QTH in a deep ravine. But otherwise a very nice place with sunshine and 25 dgs every day. Full radio report later.

More than two years ago I was called by a neighbour who had bought a new “Receiver” for his “Home Theatre”. His old one had broken down. There was now a loud noise in the loudspeakers when I transmitted. It was cured with filters made of ferrite toroids.

A week ago he called again and said the noise was back.

He had now bought a new satellite box and connected it to a HDMI port on his receiver. The problem was solved by winding the coax from the satellite head several turns through a ferrite torroid.

After two weeks of activity on 60m ft8 there has been contacts with ZL every morning over LP.

A typical screen is seen below (click to enlarge):

Band was almost void of CW stations. But the ft8 activity was high.

In the morning, at our sunrise I could log ZL4OL and ZL2CC using ft8. The station had 30 W output to a GP with two radials with a maximum gain of -2 dBi. Feedline loss was 1 dB.

Last night when looking for 9X0T on TB I was shocked to hear a S9+ signal from Africa. In the log on first call. I had been listening for days just to hear them working Europeans but mostly nothing here. Can’t understand why. K-indices are not very low. It just seems impossible to predict 160m propagation. Unfortunately the carriers from Russian navigation system were S9++ from around 1822 and down so not a chance to hear TO6OK and VK9XT who were working down there.

The 40m dipole was replaced shortly after the damage. It’s made of the same type of 12 m  poles from Spiderbeam. But now there is only a dipole for 40 inside made of copperweld wire.

I recently found it was only 20 kohm between center conductor and screen. So probably water in a connexion. The coax was taken down and loss was measured to 1.3 dBs on 7 MHz on the 40m length as compared to  0.68 dBs of a new coax. The old line had been outside in the sun and rain for 50 years. It was first used in the sixties with the 4 el Quad which is depicted above. So can’t complain. It’s now replaced with a brand new RG-213.

The propagation experiments still going on. 40m to New Zealand and 20 to the US.

A pick from the measurements (click on the image): 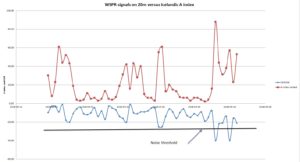 The project of finding out the relationship between A-index and propagation continues. It all started since I tought the attenuation stayed long after the A-index had fallen.

Propagation and A indicies

This morning when trying 40m the SWR was very high. When looking outside I saw the tip of the 40m dipole had fallen off. The reason for the damage was the connection of the inner and outer part of the actual antenna inside of the pole. The inner part is a 450 ohm ladder line and the outer part is a conductor from a military telephone cable. There was a knot that obviously had weared on the inside of the pole when it had flexed in the wind and weakened it.

A comparison with the help of Reverse Beacon spots revealed that the Inv vee is inferior to the dipole over the whole of Europe . Even in the direction of the dipole’s ends. Only places the inv vee is better is on short range like SM3 and ES (8 dBs in SM3 and 5 dBs in ES). But in the rest of Europe the rotatable dipole is on average 3,3 dBs better taken as a mean of 26 spots. Is half of the power going straight up?

Today I found the 40 m dipole was broken. The 10 m Spiderpole on one side was off about 2.5 meters from the tip and was hanging in the wire element. So in hours or days it will come down. Still functioning though. I put up an inverted vee dipole with top at 20m and with broadside to ZL, to be able to continue the 40 m transmissions to trace 40 m LP and SP signals to ZL1 while A index varies. The inverted Vee was about 5 dBs weaker than the dipole!

10 days of tracing WSPR signals (please click on the image):

Still trying to find the connection between the A-indices and propagation by transmitting and looking at a remote receiver in New Zealand. The result is not very convincing as can be seen here:

So I’m now collecting data from 20m WSPR signals from North America instead.

Still very good propagation on lower bands due to the quiet sun.

Worked ZL1ALA on 30 in the morning among others. Also a good opening to JA on 20m.

In the afternoon 9M0W was booming on 80. About 20 dBs stronger than yesterday:

Looking at the k-indices doesn’t explain why the propagation was so much better today:

I’ve started to make a comparison between porpagation and k indices:

See also in the propagation menue

At the same time DK9PY was -75 dBm or 25 dBs stronger. I have never been that strong.

Back from a skiing vacation.

Lower bands are very good with a quiet sun.

Today QSO with Mark ZL3AB in Christchurch on 40 m just before his sunrise. Mark is using 100W and an inverted L antenna.

There was an email from Dirk PY2UDB in São Paulo.

He says in February 22nd (excerpt from the email):

What I have noticed that about 1.5 to 1 hour before sunset (between 21:15 and 21:45 UTC), the signals coming from Europe (on 40 mtr) start to peak and getting through with less interference (QRN). But only certain geographical locations. Sweden, Lithuania, Ukraine and some Russian states at a distance of about 11.000 Km. Stations nearer have much lower signal levels or even are not hearable. I receive RST’s of 419 to 519. The stations I receive from RST 579-599

After sunset, signals from the nearer locations (6000-10.000 Km) start to appear, but not as strong as the initial period and with much more QRN.

What I also notice that the same effect happens at sunrise, in south to westerly direction (for me New Zealand , Japan) and that my signal reports are much stronger, but the DX-stations much weaker even if they use high-power. I receive RST’s from 539 to 559. the DX-stations are coming in with RST 419-539 ……….

Good propagation today. QSO with Drew, VK3XU in Melbourne on 40m. He was using his HB setup with 100 W and a dipole.

QSO with the Bouvet guys (3G9A/MM) heading for Cape Town.

Opening to the US West Coast was much worse than yesterday with signals way down. But got a recording from Don, W6QW:

Good opening to US West coast on 40m. Signals coming both over SP and LP. Worked W6QW:

I was listening on the 110 m long NW Beverage since there was severe echo when listeningen on the dipole.

Today I performed measurements on a set up corresponding to the beverage hub out in the woods. I’ve been concerned about signals picked up by the 4 meter long ground lead which runs from the hub down to the ground stakes. On 40 and 30 there is really not much difference if a beverage wire is connected or not. The reason seems to be stray capacitance on the hot side of the isolating transformer. If a wire of a few dm of length is connected to the hot side of the transformer it’s enough. Even a short between hot and cold side (ground) of the transformer made of 5 dm of wire would give full signal into the receiver from a single wire connected to the hot side. This could be cured by using screened wiring from the hot end of the transformer to the switching relays. Something for coming summer.

Worked (among others) W6QW on 40 at 1545 UTC. He reported hearing me over both SP and LP. He is using an interesting 2 el low loop antenna. Check it out on QRZ.COM.

Was on 80m this morning. Worked V47UR who was a solid S9 here. Found he was much stronger on my inv vee with broadside to SW than on my other inv vee dipole broadsided to NW. The difference was 1-2 S-units or a bit over 6 dBs. The direction to him is due West or 270 dgs. Checked my Reverese Beacon spots from NA East coast and they were almost an S-unit better on the other inv vee dipole which is intended for NA. Seems to be a sharp lobe division due West.

Back after a week in Puerto de la Cruz, Tenerife and activities as EA8/SM0BRF.

2018-01-20
A good morning for low bands. Good signls on 160, 80 and 40m.
Worked AA7G (Gert SM5LWC) in NY, KY7M in AZ and KB1EFS in MA on 160m about half an hour before our sunrise. Reverse Beacon spots showed it was a bit late but still OK. Best reception varied between the SW and the NW beverages. I suppose the reason was changing polarisation of the incoming wave. The SW Bev has big side lobes sensitive to horizontal polarisation and VOA CAP suggest a wave angle of 38 dgs.

Today the QRM from the horse fences reached unprecedented levels with clicks hitting the S9 mark. Horses got loose last night because of fireworks, so today all fences seem to be set at highest possible voltage.

Recording when listening on the NE terminated bev on 80 m: