Radio from the island of La Palma, one of the Canary Islands, in December 2016.
Departure from Stockholm December 2 early in the morning. Room with “sea view” was booked at Hotel Sol La Palma in Puerto Naos. A few days before departure, I sent an email to the hotel where I, “due to some reasons”, wanted a room facing North and as high as possible. When we checked in they had not seen any emails and the room we got had a view of the sea but in a narrow sector due South. The room was located on the third floor of five.
After persuasion we would after a few days get a room facing North on the fifth floor. It had a very good location for communication between 210 degrees over the northwest to 360 degrees due North. Towards Europe, it was both a part of the housing body blocking and after 500 meters there was a several hundred meters vertical mountain side. The balcony had a railing with a stainless steel frame.
The setup was a FT-817ND, an ATU from LDG Z817, a small power supply, and a manipulator made of copper foil laminate. The antenna was 5 meters of thin copper wire along a foldable fishing rod, a pair of counterweights and a short lead with a powerful battery terminal. For best SWR on 20m the earth wire had a capacitor in series. An extension of the rod consisted of a split broomstick of thin walled steel.
Radio activity was limited to evenings because of different excursions during the day.
In the first test on December 4 the Auto-tuner did not work properly. It turned out that the batteries were discharged. Probably due to the Tune button had been pressed during the transport in the suitcase. The first evening was run without a tuner. It worked because the SWR on 20m was not so high. The rod was mounted on the railing and pointed toward the northwest and tilted upwards by 45 degrees. This was done in an effort to reach Sweden. SK0CC and SM0DDK were heard on 20m with weak signals. It was 1745z and the band had closed in Sweden. Fifteen minutes later I had a QSO with W3PV 20m.
On the 5th of December, the antenna position was changed to point to the South West but we were too late back to the hotel. Propagation on 20m had gone down so that I did not reach the US on 20m and the efficiency of the antenna on 30m was too low.
On the 6th we were back early enough for a QSO with F6IJU on 20m at 16.55z. Good signal strength despite several hundred meters high rock wall in the way. With two F2 hops the radiation angle is 21 degrees, which would just clear the mountain ridge. At 17.30z I worked SM0DDK at 30m with the 20-meter antenna. Later, stations in North America and the Caribbean were worked with very good signal strengths in both directions. Good spots from the Reverse Beacon stations: 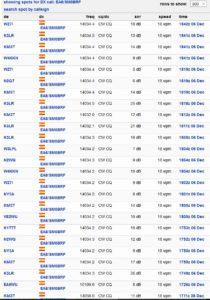 On the 7th of December the antenna was extended with a 2.5 meters long wire to improve the efficiency on 30m. 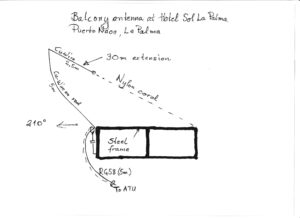 With the help of the ATU the antenna also had an excellent performed on 20m.
Good signals to North America. Among others VE2PID who used 5W, but used his Yagi 20 meters up.
The evening ended at 2148z with a 30m QSO with AA4V, with the reports 599/579. 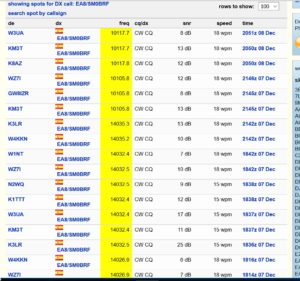 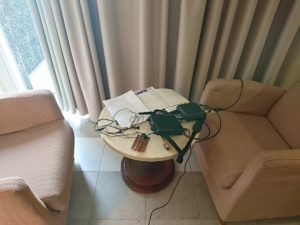 View from the balcony to the northwest: 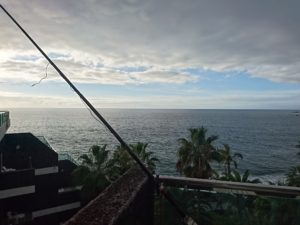 It can be noted that the propagation was worse than at the trip to Tenerife in 2014. Above all 20m and higher bands closed several hours earlier now.