On December 8, 2018, XYL and I traveled to Puerto de Mogan on Gran Canaria. As usual, I brought my FT-817nd. We stayed at Cordial Mogan Playa Hotel, a few hundred meters up the ravine from the village. It was easy to predict that the QTH was not the best with high mountains all around except to the South-West. I checked the take-off angle using http://www.heywhatsthat.com/profiler.html and estimated it to 10 degrees. I judged that it would be possible to work from the bottom of the ravine after all. Once in place, the angle from the balcony to the surrounding mountain ridges were measured to 35 degrees to the west and approximately 60 degrees to the east. Against Europe, the angle was slightly lower than 35 degrees.

The fishing rod with 5 meters of antenna wire alongside was mounted on the balcony in the southwest direction and pointed upwards at 45 degrees. As a counterweight, the balcony’s steel rail was used. The ATU could match the antenna from the 30 to the 15 meter bands.

It turned out that all amateur bands from 20m upwards were completely dead. There was not even any atmospheric noise.

However, contacts were possible daily with Europe on 30 and 40 m from an hour before sunset for about 20 minutes. That was from about 1710 to 1730 local time and equal to GMT. The sunset was around 1810. It shows that the radiation angle at that time was very high. The signals probably entered at an angle of 30 degrees above the horizon or more. A very good indicator was the German weather station at 10100 kHz. It went from S0 on the meter to S8 for a few minutes and then quickly fell back again.

To be able to use 40 m, a 5 meter long extension of the antenna wire was connected from the tip of the fishing rod wire back to the other end of the balcony. It became a fairly pointed angle, but the ATU could match the extended antenna on 40, 30 and 20m. 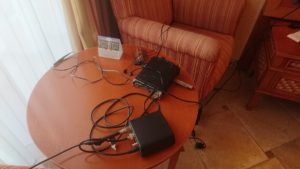 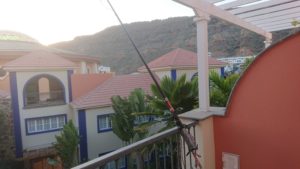 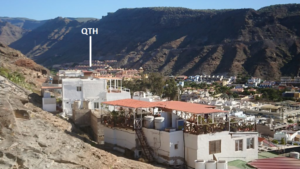 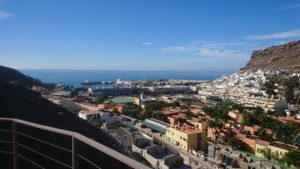 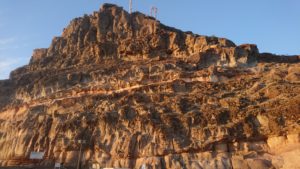