Sometimes I experience a lack of reciprocity for the two directions of a connection. As an example it has happened in contacts with Japan at 17 m. During a period of about an hour, I have received several S-units better reports than I could give. Later, conditions have been leveled and more reasonable reports exchanged. Is it true or imaginary? And then meant “S-meter deflection” and not SNR, Signal to Noise Ratio.

To investigate the phenomenon I started a series of measurements using WSPR. An explanation of WSPR are in another post, but broadly it’s about that a station transmits its identity at different intervals and in between listening for other stations. The received stations are automatically logged with an indication of the SNR.

Actually, we want to have the absolute signal strength and not the SNR. However, I have found that the background noise in my location does not vary so much throughout the day on the higher bands from 20 m upwards. If one makes the bold assumption the same is true for most other stations, WSPR can be used to examine the reciprocity of the transmission path.

Typical back ground noise over 24 hours: 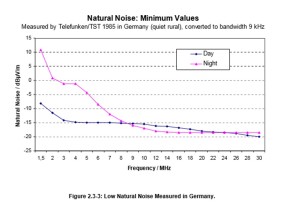 The measurements were performed during the end of the year 2013 and beginning of 2014.

I couldn’t demonstrate any systematic difference in propagation. However there were short periods of non reciprocity.

Below is an example of a series of measurements towards Japan on the 17 m band: 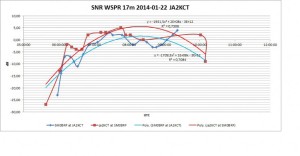 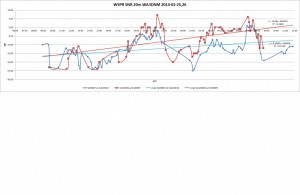 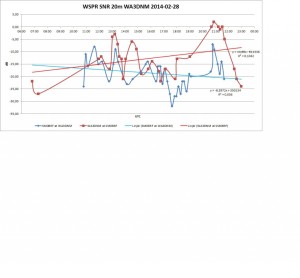 Others have looked at this phenomenon earlier.

” Tests have been carried out under carefully controlled conditions to see whether the attenuation of high-frequency signals sent over a given long-distance radio path differs according to the direction of transmission. The results obtained both across the North Atlantic and between Australia and the United Kingdom show that at times the loss in both directions is substantially the same, and that at other times the loss difference can rise to values of the order of 5 or 10 dB”.