Last night I worked CX5FK / QRP on 20 m. Today an e-mail came with a link to his Youtube channel. https://www.youtube.com/watch?v=oBBTnb6HcHE
I had bad QRN from thunderstorms over Spain one hop away.

I have now tried my purchased SDRPlay RSPduo.

The first test on 7 MHz with two passive 2-meter loops gave an improvement of SNR of about 10 dB if I used diversity. They are 10 m apart along the loop plane.The phase angle fluctuates violently. Don’t know what it indicates.

Later I tested my 30 m dipole against other antennas in manual mode to see if local interference could be removed. If I used the 60 m vertical as antenna two, I could remove a pretty strong interference, but I think it was induced in the vertical.

2020-04-02
Today I started to design a passive magnetic loop with a diameter of 2 meters. After a bit of googling, I found that it required such a large loop to get a high efficiency of 7 MHz where it is thought that the measurements of the radiation angle should be done in the first place.
http://www.66pacific.com/calculators/small-transmitting-loop-antenna-calculator.aspx
May be needed if measuring weak DXX signals.

According to KB9RLW, a small change in the coupling loop can give a big improvement:
https://www.youtube.com/watch?v=2RDtm6qXjuI
The loop: 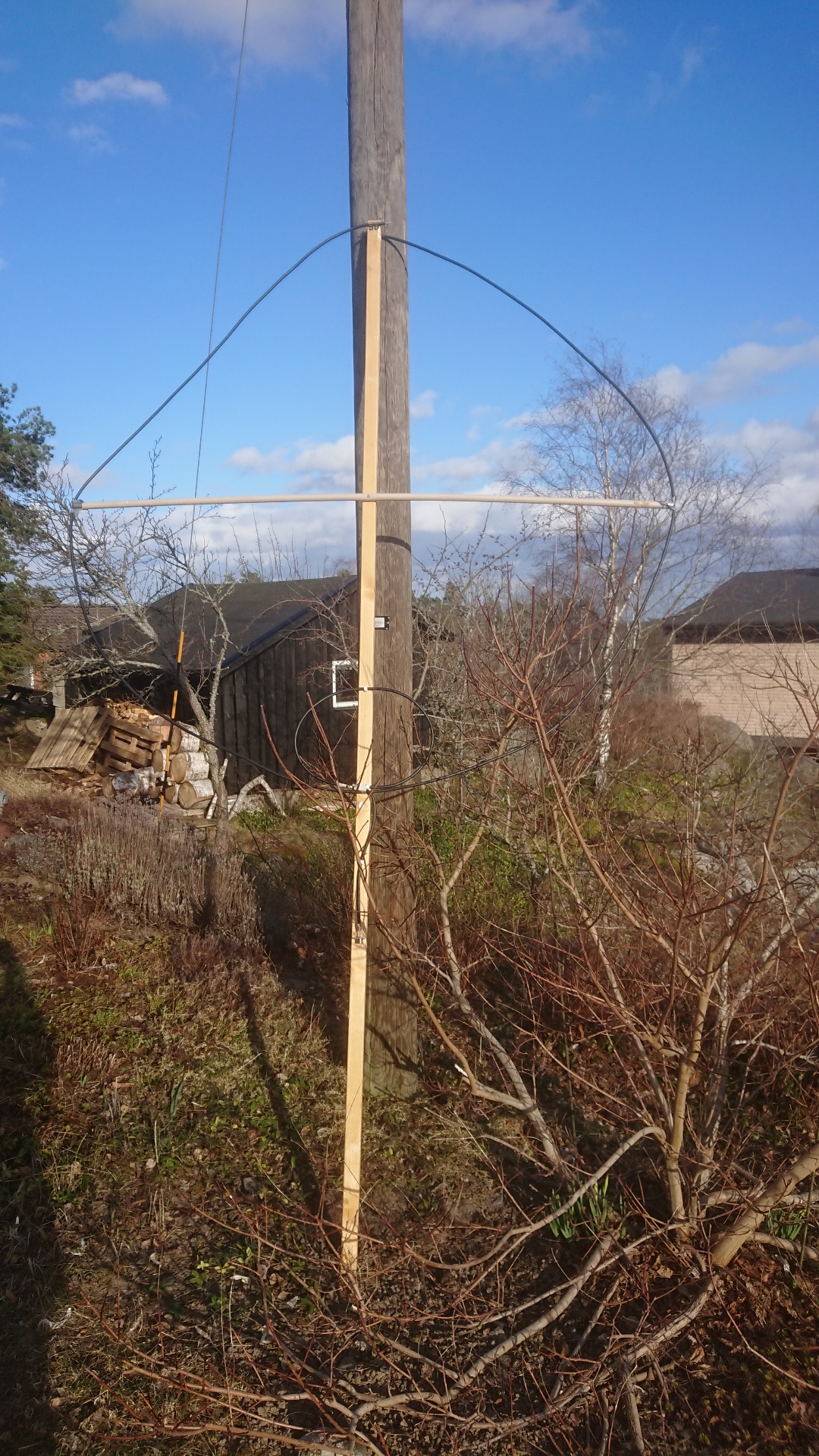 To measure it, a capacitor of 110 pF was connected and the resonance was measured with a MiniVNA: 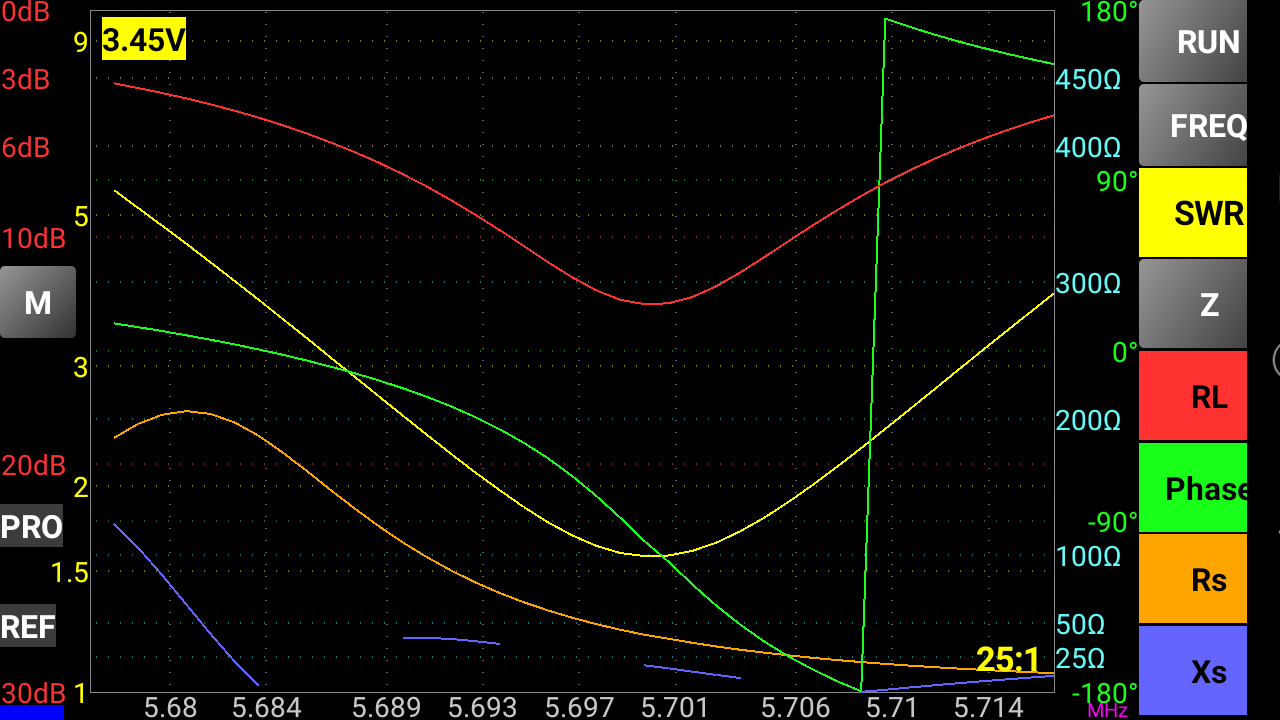 The resonant frequency was 5.7 MHz. Usable bandwidth is about 0.25%. If the loop capacitance is ignored, a capacitance of 74 pF must be used for the resonance at 7 MHz.

The self-capacitance seems to be just under 9 pF according to:
https://www.teslascientific.com/products/coil-capacitance-calculator/

In this case, the inductance of the loop is about 6.6 uH. For a 7 MHz resonance, the total capacitance should then be 79 pF. Thus, if the self-capacitance is subtracted, the external capacitor must have a capacitance of 70 pF.

This morning I tried the new vertical for reception on 60 and 40 meters.
At 60 m I got no decoding on FT8 of any ZL station. They had an SNR of up to – 10 dB on my northwest Beverage. They were – 18 dB on my TX vertical. However, Europeans had the same SNR on the receive vertical as on the Beverage. For example, PG0DX was +17 dB on both antennas. It is below a certain threshold in signal strength, where  it becomes critical.
At 40 m I had contact with LU8HHB. He was well readable at S5 on my rotatable dipole which is 21 meters up. You could hear he was there when I listened on the receive vertical, but he was unreadable.
I later listened to weak stations on 80m. There were stations which were perfectly readable on my inv vee dipole but not heard at all on the the receive vertical.

It appears that a small receive antenna will not be sensitive enough for weak signals if it is broadband. There is too much noise in the connected broadband amplifier no matter how good it is. A tuned loop, on the other hand, has sufficiently low noise if it has a high Q value.

Today I put out a vertical antenna for reception in the forest. It consists of a vertical radiator and two raised counterweights. All wires are 3 meters long. It is connected to the same broadband amplifier used for the loop previously.

It seems to work OK for European signals on 160 to 20 meters. However, when compared to my 3 element Yagi at 22 meters on 14 MHz, the signals were down almost 30 dB.

2020-03-26
This morning I tested the passive loop at 7 MHz. It worked well for receiving weak signals provided it was precisely tuned. A useful frequency range is only +/- 10 kHz for best SNR on received signal.

The pickup loop with connecting coax consists of 75 ohms TV coax. Hence the high SWR at resonance as the analyzer measures at 50 ohms.

The loop was tuned in the evening, but had moved 50 kHz during the night. The cause is unknown. Maybe the frequency drives with the temperature. In any case, it shows that it should be possible to tune the remote in final set up.

2020-03-25
Tried the active loop again today. I wanted to see how it worked at 7 MHz for weak signals. I first measured that the noise increased 7 dB when the antenna loop was connected. So it seemed hopeful. Unfortunately, it did not work at all for weak signal reception. Could it possibly be “cross modulation” that is heard as a noise and drowns weak signals?
I worked among others ZL3XDJ. There were poor conditions, but he was well copied on the dipole at 21 meters and the NW Beverage. He was an estimated 10 dBs over the noise. However, not audible on the loop.

2020-03-24
This morning I tried the passive loop again. Now without glitch in the rotary capacitor. Unfortunately, they were the same results as last time. Typical signals from ZL on 60m FT8 were -7 dB on the NW Beverage, -11 dB on the SW Bev and -14 dB on the passive loop. There is a rattle of 100 Hz at the bottom of the signal on all the antennas.

2020-03-23
Checked the passive loop against ZL on 60m this morning.
The best signal was as usual on the NW Beverage. The SW Bev was 3 dB inferior and the loop was 7 dB inferior to the NW Bev. But it was very low output from the loop. I went out later and checked with my FT817. There was obviously transitional resistance in the variable capacitor, so I had to rotate it a bit back and forth and then I got a resonance and a sharp increase in noise.
Later checked against a weak Frenchman who was around -15 dB. Then the SW Bev was the best, but the loop was only 1 dB worse. The NW Bev was 8 dB inferior to the SW Bev.
Will check again tomorrow against ZL after spraying the capacitor.

The noise from the active loop was measured with and without the loop (shorted). The measurements showed that the atmospheric noise was 7 dB stronger than the amplifier noise at 1700 CET on 23 March.
One hour before sunset.

As part of my project to measure the incidence angle of incoming radio waves for DX at low frequencies, I tried an active loop at 5 MHZ FT8 for ZL over long path. The loop was about 50 meters into the forest. Unfortunately, the loop turned out to be too noisy. I had to switch to a Beverage as the receiving antenna.

The amplifier was made according to a scheme found online https://www.pa1m.nl/simple-active-receive-loop/. I had replaced the transistors with the switch transistors 2N3019, which I had in the junk box. It may not have been optimal.

I have now replaced the active loop with a passive tuned loop. It seems to work better and does not have the same noise. When listening to XV1X he was about 4 dB better on my 130 meter long NE Bev when around -20 dBs. When the signal reached 0 dB there was no difference between the antennas. Will see how it works for ZL LP.

This morning the propagation on 160 and 80 was extreme.

One QSO was with N5CM in LA on 80m CW. At my sunrise he was S9 on my dipole and he was using 100W to a horisontal loop 18 m high. At first, I was using my Inverted Vee dipole facing NW/SE which normally is best for NA. But later I found the Inv Vee dipole facing SW/NE was 1-2 S-units better!

Recording from 160 m using the new 190 bev. Starting with RX connected to the bev. I’m keying “bev” in CW. Then switching to the TX antenna while I’m keying “vert” and then back to the bev. The station recorded is WU1ITU. No detectable signal when listening on the tower:

The NW Beverage is now extended to 190 meters and terminated. The performance on 160m is excellent.

VP6R, Pitcairn Island on 80m CW. In the log around 0600 UTC with my simple Inverted Vee dipole.

What can be achieved with an indoor magnetic loop?

The other day, when I was calling CQ on 20m beaming NW I heard a weak signal replying. I could only get odd characters through. After next CQ though the signal had raised out of the noise. It was Hugh, VA7UNX who was calling and he now had QROed from 5 to 15W. He was using a K2 and a homebrew magnetic loop inside his second floor flat leaning towards a bookshelf! The attached picture shows the antenna in operating position.

My radiator on my tribander is now modified with separate dipoles for 20, 15 and 10m with the dipoles for 10 and 15 horisontally strung between a center support and a 50 cm long vertical spacers about 4 m from the center.

Two years ago the dipoles were strung from the center support towards the end of the 20m dipole but this was no good. he ends were close to the 20m dipole affecting the resonant point greatly when moved in the wind.

60 m is an amazing band. Open to ZL long path every morning. But one thing has puzzled me: ZLs has always had a better SNR by 3 dBs on my NW 110 m long unterminated beverage compared to my 185 m long WSW terminated beverage. One can argue it might be due to higher noise on that one but the NW bev sounds noisier. And stations in Europe in the SW direction are definitely much better on the WSW bev.

So this morning I ran out into the woods with my FT-817 and a mag loop to find out. I didn’t bring a laptop and accessories but just listened to the carrier from ZL4OL. And I couldn’t find any bearing. The signal seemed to come from any direction! To me it means the signal came down at a very steep angle. The Europeans on the other hand could be pinpointed in their true directions.

Today I got the small FT-817nd running on FT-8 using the DigiMaster
MiniProSC external soundcard and the dongle Yaesu CT62 CAT Interface. All from http://www.g4zlp.co.uk/ .

It was necessary to change the default LSB to USB in DIG mode on the rig.

So now I’m prepaired for next vacation trip.

By the way the old free HRD SW was awesome in conjuction with the FT-817. No menue struggle, just click on a button and BIG digits and a large S-meter bar.

Tried PSK Reporter for FT8. What an excellent tool to find out where to the band is open: PSK Reporter

Northerly storm during the night. Antennas seem to have survived but the 40m dipole had twisted 90 dgs around the mast.